Lakes and Rivers in Montana.The Flathead River, in the northwestern part of the U.S. state of Montana, originates in the Rocky Mountains near Glacier National Park and flows southwest into Flathead Lake, then after a journey of 158 miles (254 km), empties into the Clark Fork. The river is part of the Columbia River drainage basin, as the Clark Fork is a tributary of the Pend Oreille River, a Columbia River tributary. With a drainage basin extending over 8,795 square miles (22,780 km2) and an average discharge of 11,380 cubic feet per second (322 m3/s), the Flathead is the largest tributary of the Clark Fork and constitutes over half of its flow.

Get your  150+ page Flathead Lake trail guide. or visit the website: GoHikeWithMike.com

The Flathead River rises in forks in the Rocky Mountains of northwestern Montana. The largest tributary is the North Fork, which runs from the Canadian province of British Columbia southwards. The North Fork is sometimes considered the main stem of the Flathead River. Near West Glacier the North Fork combines with the Middle Fork to form the main Flathead River. The river then flows westwards to join the South Fork and cuts between the Whitefish Range and Swan Range via Bad Rock Canyon. 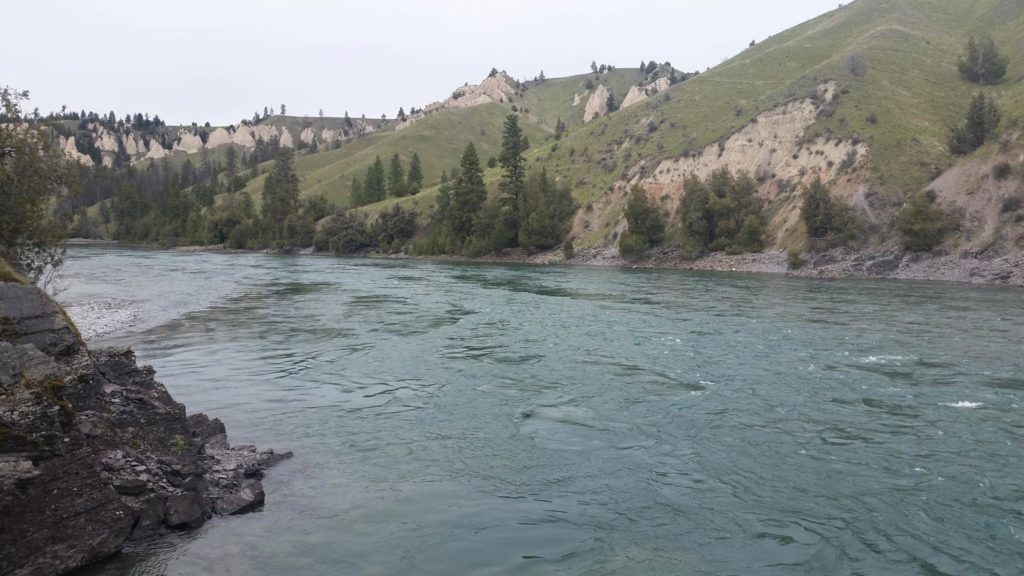 All of the headwaters forks are entirely or in part designated National Wild and Scenic Rivers. After the river leaves the canyon it flows into the broad Flathead Valley and arcs southwest, passing Columbia Falls and Kalispell, before joining the Whitefish River and emptying into Flathead Lake, where the Swan River joins.

Lakes and Rivers in Montana

Near Polson the river leaves the natural basin of Flathead Lake, but first passes through Kerr Dam, which maintains the level of Flathead Lake artificially. After the dam the river turns south and meanders through the Flathead Valley west of the Mission Mountains, and at Dixon it is joined by the small Jocko River. At the Jocko River confluence it turns west, and a few miles after flows into the Clark Fork near Paradise.